by sewdainty
in Bits and Bobs 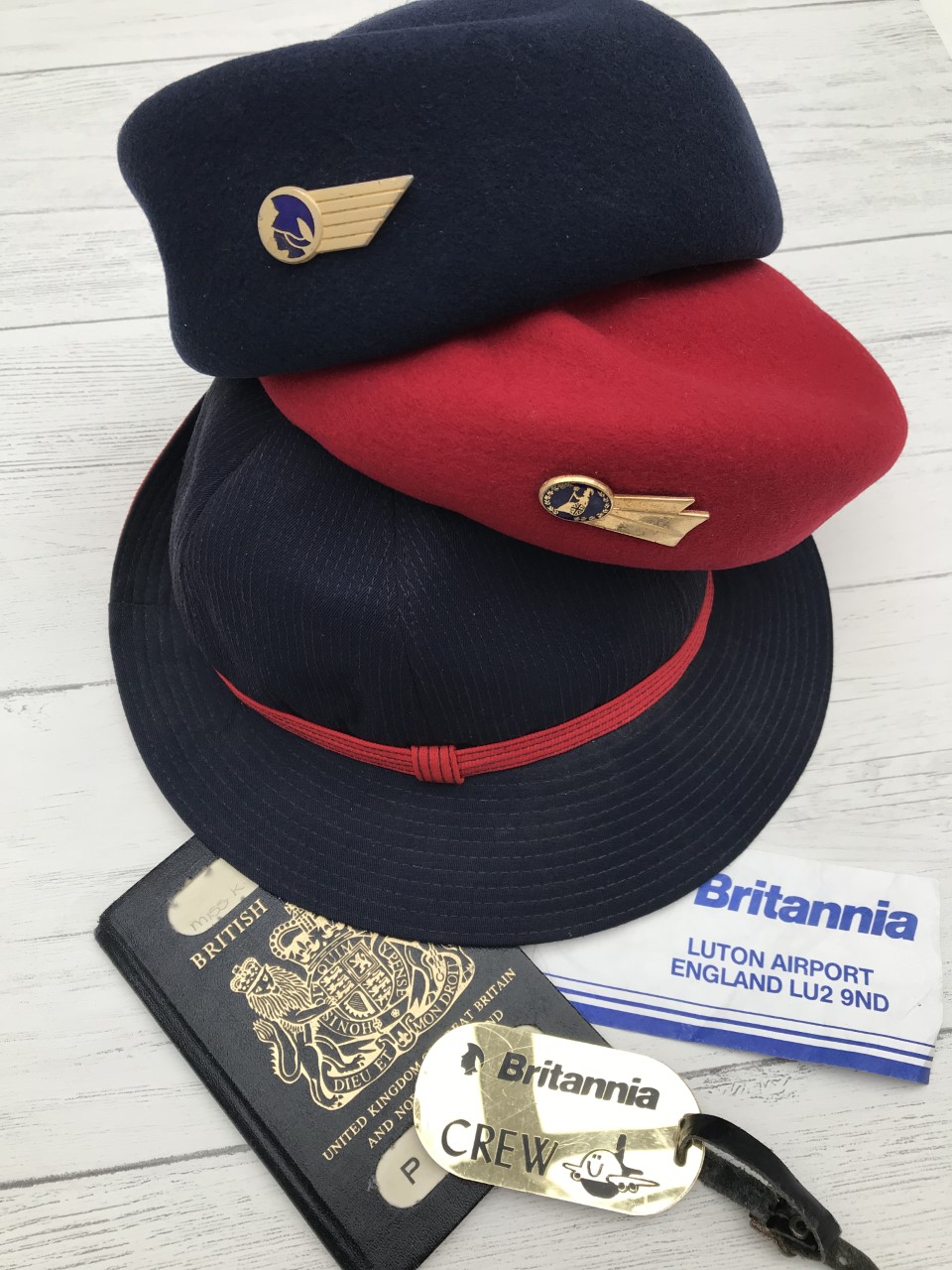 Something a little different from me today. A few weeks ago, whilst searching through boxes in the attic to find old family photographs to share with my brother who was visiting from Australia, I came across a box of my old cabin crew uniforms.

Whilst I realise that this is a sewing blog, I can’t deny that fashion and style is all part of what I love, and I wondered if you would like to take a peek at some of the various different uniforms that I wore for the 11 years that I flew for Britannia Airways from 1987 – 1998. If this isn’t your interest then don’t worry, normal sewing blogs will resume as usual after this one.

Our uniforms were always made up of a ‘Summer uniform’ which was worn from May to October and a ‘Winter uniform’ to be worn from November to April.

My first Summer uniform, worn when I started flying in 1987 was a red white and blue pleated blouse with a double row of red buttons which ran down into the pleated skirt. This was worn with a red belt with the Britannia Airways logo and a skinny neck tie. Shoes were navy heeled court shoes for outdoor, to be changed into flat cabin shoes once the aircraft doors were closed. If you were really feeling fancy you could wear red heeled court shoes with this Summer uniform (at your own expense) how very 1980’s!

The tabard is quite awful isn’t it, but certainly tied in with the whole red white and blue Britannia theme. No expense was clearly spared with the dymo name badge and rather scruffy sew on badge! Oh dear!

The Winter uniform was another similar red, white and blue blouse- slightly different print to the Summer fabric design, and a big old neck bow which I thought was fabulous at the time. A navy blue skirt with inverted pleat and single breasted jacket completed this look. Navy tights could be worn with the Winter uniform.

The hat. What can I say about this hat. I hated it and always felt that it was too small for me. Oh well. Hats were worn at all times with uniform and could only be removed once all passengers were on board and the doors closed.

After quite a short while flying with the airline, probably only a year or two, the uniform changed, and the company went away from the traditional red white and blue and brought in some more neutral colours. The Summer uniform was a striped blouse with matching pleated skirt and a neutral belt. A floppy neck bow in matching fabric was affectionately referred to as the ‘dead bat’ and I remember the white collar was a magnet for foundation make-up stains.

The tabard was a little better (as far as tabard’s go – I mean, is a tabard ever going to look nice)? You could remove your ‘dead bat’ if you wanted to when wearing your tabard.

The Winter uniform was made up with the same blouse and paired with a slim navy blue skirt and a military style jacket with button details. It also had a reversible belt.

The hat was an improvement on the last one!

Roll on a few more years and the next uniform was a dramatic change in colours when the company introduced a vibrant yellow into the mix.

Sadly I don’t seem to have my Summer uniform. This was a double breasted mock wrap dress made from the same yellow patterned fabric as the Winter blouse shown below.

The Winter uniform consisted of this yellow blouse, a matching drapey neck scarf, and pencil skirt with off centre button detail. The jacket featured this pleated ‘wrap’ detail meeting with three off centre buttons. A red hat this time.

The final uniform that I wore I don’t have any more. This was a uniform that was designed by Elizabeth Emmanuel (Princess Diana’s wedding dress designer is her claim to fame) and was much hyped and quite expensive by all accounts. Thus when I finished flying in 1998 and left to have a baby, everything had to be returned. Sad times, but I will pop a photo below to give you an idea.

I hope that you have enjoyed taking a peek at some of my old uniforms. I definitely look back at my flying career with fondness now. Some good times, some bad, but I wouldn’t change a thing. Well maybe those tabards .. Ha!

Take care, doors to manual, and I’ll be back soon,