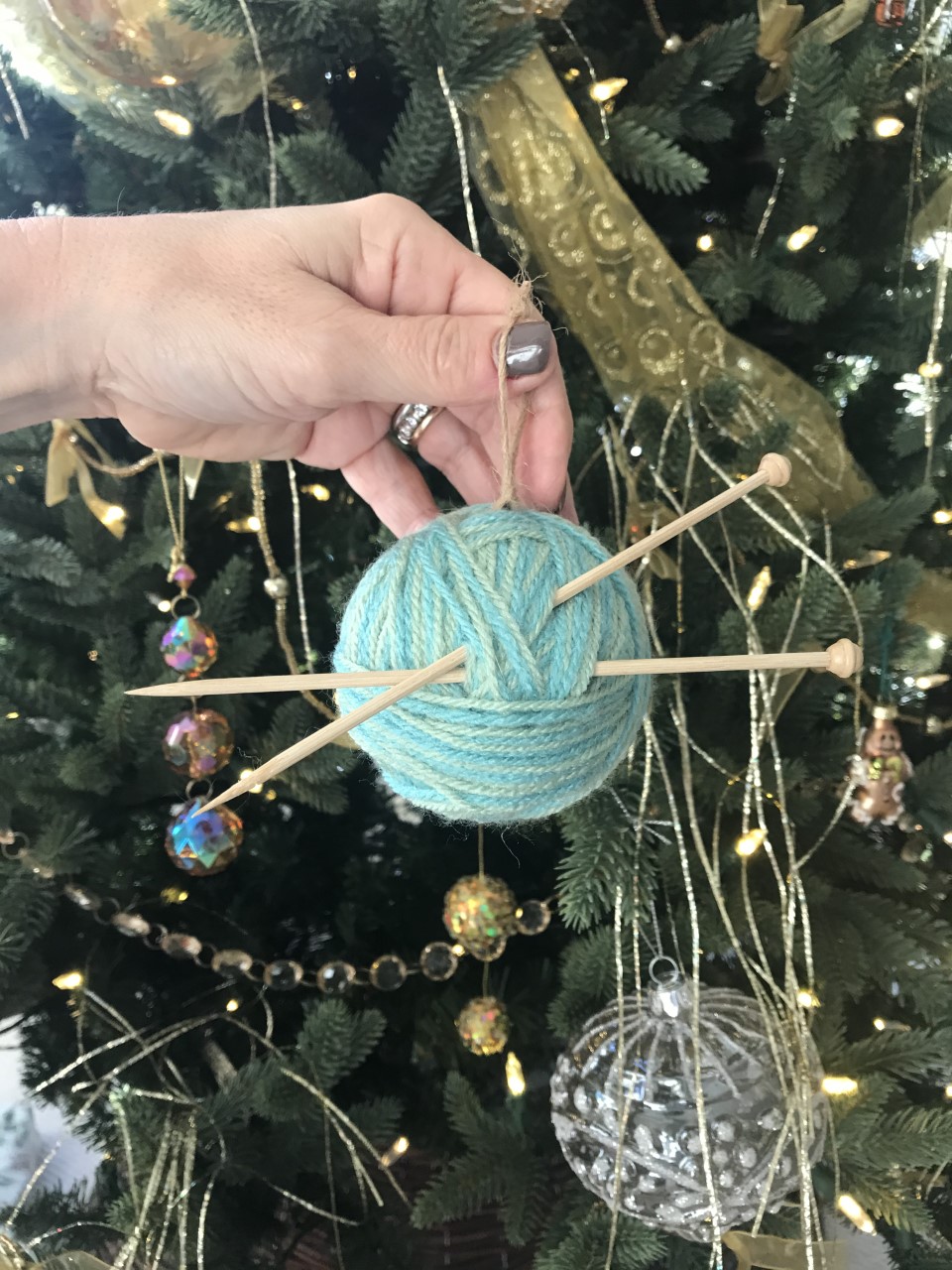 Ok guys, guess what? I have just finished knitting my very first sweater! I’ll probably blog about it here next week. In the meantime, to celebrate my new found love, I give you …..a knitting inspired hanging tree decoration!!

It turned out super cute (I think so anyway), and it honestly takes no time at all to make. I might have been a little bit inspired by the knitting themed jewellery in my shop here and here 😉

Just in case you can’t work out how I made it, I took a few pics as I went along..

You will need the following… yarn, a bauble (or something similar and lightweight like a polystyrene ball), clear glue or a glue gun, a bamboo skewer, and two beads or pom poms for the ends of the knitting needles.

First off you will need to start wrapping your yarn randomly around your bauble or lightweight ball. I am using a clear ‘fillable’ craft bauble that I had left over from last year when I made these crochet baubles. But you could just take any old bauble as you are only going to cover it.

You can see that I used two different yarns in similar colours to give it a more pizazz. Nothing wrong with using one though of course!

A good tip here it to use a tiny bit of sellotape or glue to attach the ends of the yarn securely to the bauble before you start wrapping to stop it slipping. Stick with me kids… get it?! Ha!

My bauble already has a plastic hanging loop (and twine to thread through it), but if you are using something that doesn’t already have a hanging loop, just create one of your own with your yarn as you wrap.

When you feel you have wrapped enough (it doesn’t take long), cut your yarn and use some glue to stick the ends to the bottom of the bauble where it won’t be seen. You can also take individual strands that look like they might come loose and carefully place a ‘blob’ of glue underneath them to hold them in place securely.

Nearly there! Next I took a bamboo kebab stick and cut it in half. Ok, that’s not entirely true. I asked my husband to cut it in half for me as I knew he would make a neater job of it than me. I estimated that very conveniently half a bamboo stick might be just the right length. He also sanded down the end of the other half of the stick so that they were both pointed like real needles. You can leave it like this or you can have a rummage for two items that you can pop onto the end of the needles to make them look much more realistic! I used two wooden beads from my stash, but you could use those small ready made pom poms from the craft store if you have them (they’re the pink fluffy things in the pic below) or dried peas… you name it. Either glue these on to the ends or go with the hubby’s idea to carefully shave the blunt ends of the needles too, just enough so that you can squeeze the beads on snugly.

Finally, slide the pins through your ‘ball of yarn’ however you like and voila! you’re done. Easy peasy lemon squeezy.

Ooh, be careful if you have children or pets that might hurt themselves on this won’t you x

Take care, I’ll be back soon,

0 Comments for “How to make a knitting ornament.”